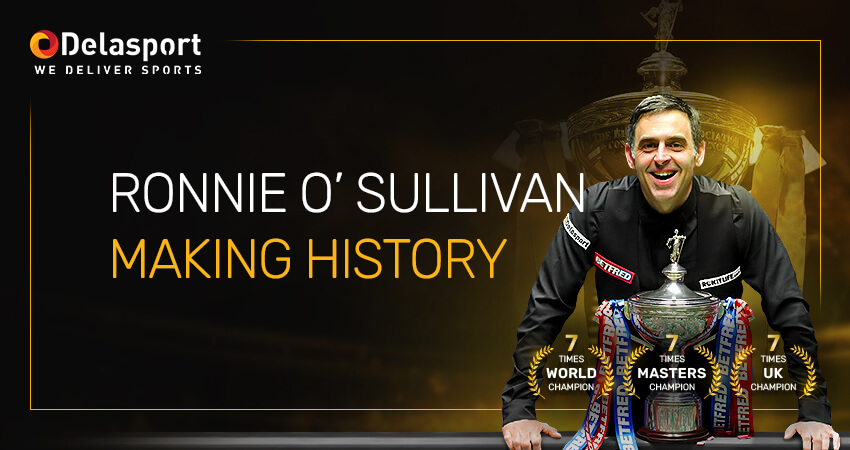 From all of us at Delasport, a huge round of applause for our partner, Ronnie O’Sullivan!

Ronnie, who is widely considered the best snooker player of all time, cemented his place as the game’s finest by defeating Judd Trump 18-13 on Monday 2nd May to win a record-tying seventh global title.

His 18-13 victory over Judd Trump in the World Championship final was thrilling to see, but it was the images that followed that will be remembered for a long time, with O’Sullivan in tears as he held on to Trump before hugging two of his children.

Drawing level with Stephen Hendry, Ronnie used his innate flair and unrivaled skill during the tense match, demonstrating why he is the sport’s unquestioned best player.

This is a snooker fan’s dream story: matching Hendry’s record has long been the goal for Ronnie, a goal he has always hoped to reach – and now he’s done it. The Rocket has dominated this tournament from start to finish, so while the win has not come as a surprise, it is no less thrilling to see his history being made.

While his victory makes him the oldest world champion in Crucible history, he is showing no signs of slowing down: in fact, he only seems to be getting better. Ronnie, a right-hander who can also play left-handed, has the most career ranking championships (39), is the only player to make more than 1,000 competitive centuries, and has made more maximum breaks of 147 in competitive play than anybody else.

This triumph adds to world titles won in 2001, 2004, 2008, 2012, 2013, and 2020. He also has seven Master’s titles and seven UK Championships to boot, and has been the recipient of many sporting awards and recognitions, including an OBE (Order of British Empire) from the Queen of England.

As Delasport’s brand ambassador, Ronnie was wearing our patch during his gripping final and will continue to do so in future tournaments. He has also featured in a media campaign focused on our partnership, including a video (which you can see below), a photo session, and across our social media platforms.

We wish Ronnie some well-earned time to relax after his intense weekend and look forward to working together again very soon. Stay tuned!