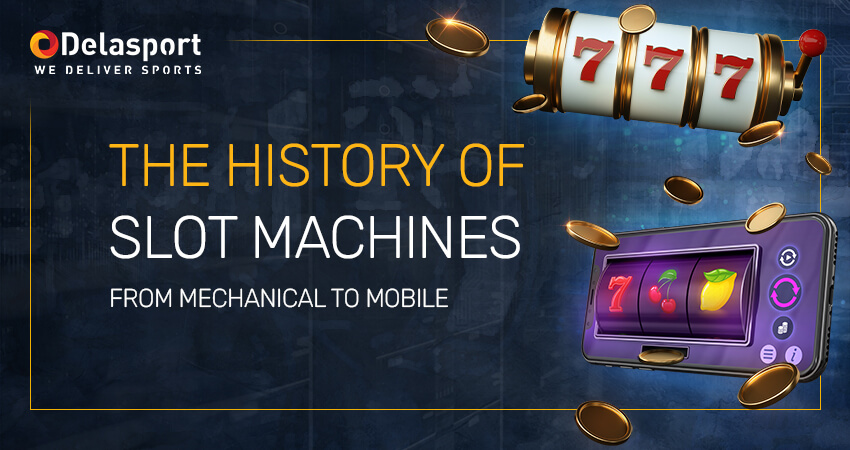 History of slot machines: From mechanical to mobile

Slot machines have come a long way since their invention more than 130 years ago. They are now at the heart of the entire global gambling industry and are incredibly popular thanks to their simple rules and accessible gameplay.  From the traditional one-armed bandits to smartphone slots, join us as we look at the history of one of the industry’s most enduring and popular games.

The history of slot machines starts with the New York-based company, Sittman and Pitt in 1891, with their machine made up of five drums and 50 playing cards. Costing a nickel to play, the machine quickly become popular in many bars due to the novel mechanism of pulling the lever to line up to winning poker hands on the reels. Of course, the house needed to have the edge, so two cards – the ten of spades and the jack of hearts – were removed from the machine, cutting the odds of getting a royal flush by 50%. At the time, the machine had no way to payout wins, so players would go to the bar to collect their winnings – which were often non-monetary in nature and took the form of free drinks or cigars.

Charles August Fey, an American inventor of Bavarian descent, created the first slot machines (in the modern sense) in 1894. The coin-operated machine proved a hit, prompting Fey to build a new machine (the 4-11-44) which was so successful he opened a factory to produce them full-time. In 1898 he once again broke ground by creating the Card Bell, which was the first three-reel slot machine that could automatically pay out cash prizes. Then came the Liberty Bell in 1899 which made history and iterated on previous designs, shooting slot machines into the mainstream.

Many variations followed, some of which paid out winnings in the form of fruit-flavored chewing gum.  Today’s slot machines still feature the popular cherry and melon symbols derived from those early machines, with the famous BAR symbol originally derived from an early logo of the Bell-Fruit Gum Company.

In 1907, Chicago-based manufacturer Herbert Mills produced a slot machine called the Operator Bell, based on the now-famous Liberty Bell. By 1908, the machine was found in most tobacconists, bowling alleys, shops, and salons.

Another first in the history of slot machines comes from The Bally Manufacturing Co., who introduced the first entirely electromechanical slot machine in 1964 under the name Money Honey. Pulling the lever was still required to start the game even though the reels were entirely electrically driven, so that players could still feel familiar with the game. And, with its bottomless hopper, it was the first slot machine able to pay out as many as 500 coins. As time went by, the handle was phased out and buttons became the main method of starting a game.

The next milestone in the history of slot machines came from Fortune Coin, who created the first video slot in 1976, manufactured in Kearny Mesa California by the Las Vegas-based company Fortune Coin. Using a modified Sony TV for the display, the game was first seen in the Las Vegas Hilton Hotel before it finally got approval to go statewide from the Nevada State Gaming Commission after some modifications and protections against cheating. After that, electric slot machines were seen all over the strip, raking in large amounts of cash and ushering in a new era of slot gaming.

Progressive jackpots were first introduced in large casinos in 1986, with the first progressive slot machine being Megabucks, which was developed by International Game Technology(IGT). The winnings increased every time a player did not hit the jackpot, creating a winning pot that had no limit. Then, in 1987 a lucky player made history on his own but winning the very first progressive jackpot to the tune of $4,988,842.17.

When WMS Industries Inc. released “Reel ‘Em” in 1996, it marked the next significant turning point in the history and development of slots. It was the first video slot to have a bonus round on a second screen, where the bonus game was played on an entirely separate screen when the bonus round was initiated. This, and other features contributed to the continued growth of slot machines – to the point where they made up a significant portion of a casino’s revenue and occupied much of the available floor area.

In the 1990s, the era of online casinos started, ushering a new age in the history of slot machines. It was initially met with a great deal of opposition and skepticism from both regulators and gamblers, with authorities being concerned that it would encourage other illegal activities in the black market, such as money laundering. Then there were the gamblers themselves, who could never have imagined online slots having the same enjoyment factor as the physical game.

The Temple of ISIS and Microgaming

There is speculation that the first online casino was created in 1994, however, there is no concrete evidence on the Internet as to which casino this was or whether it still exists. What we do know is that Cryptologic and Microgaming, two major players in the online gambling software development market, worked together to form the first major online casino in history. The first slots game was called Cash Splash, which was from Microgaming.

Since then, there have been hundreds if not thousands of slot games being created. They are easy to develop as random number generators had already been around for some time. And, with the ongoing evolution of technology, developers could create slots with better graphics, sound effects, unique bonus features, and large payouts.

In 2005, the history of slot machines took another turn, as slots on mobile became a reality, with Pub Fruity being the first Java casino game, featuring a vibrant display that emulated a classic pub fruit machine. However, winning in these slots did not net any real cash, only virtual rewards.

The first iPhone was first released in 2007, followed by the App Store in 2008, opening up a whole new world for both developers and consumers. Although online casinos had been around for a decade at this point, the prospect of mobile gambling was a true evolution. With the app store, developers could create games and market them directly to consumers, prompting the Android Market place to follow suit.

Around this time, casino websites started offering downloadable games, and as long as you downloaded the file straight from the casino website, you could play slots that were optimized for mobile devices on your phone. This was also the first time that players could make deposits to mobile slots.

One of the most groundbreaking metagames in history was the Red Tiger Daily Jackpot, introduced in 2016, and since improved with the addition of an hourly jackpot. The mechanics were elegant and smart, introducing jackpot capabilities on any game as a metagame, with a short-time jackpot guaranteed.

Pragmatic daily drops, introduced in 2020, would offer random prizes during a win. Then there were other notable meta games, including Quickspins tournaments, launched in 2018, and Poker Stars Races,

The Megaways engine, which was released by casino game developer Big Time Gaming (BTG) in 2016, had a revolutionary impact on the slots vertical. It thrust the studio into the public eye and attracted major casino content creators. The slots engine (also known as a random reel modifier) was impactful because it changed the number of symbols that land on each reel during a spin, resulting in thousands of different ways to win. The Megaways games got player attention because of the chance (even if it was the slightest) win x100,000 over the bet, while the multiplier changes in every round. Megaways took the industry by storm, putting themselves firmly in the history of slots. As a result, today offers many new titles to choose from, from a range of industry-leading developers.

Thanks to the development of web and mobile-based casinos, younger players are playing more slots than ever, and while developers have brought the classics to modern times, they must keep innovating to maintain player engagement or risk losing out.

With almost 27,000 video slots produced so far and about 100 new ones released every month, the competition is tough. But, this rivalry pushes video slots providers to push boundaries, coming up with new mechanics, and adding meta games like tournaments, missions, surprise prizes, short-time jackpots, and more.

The history of slot machines is far from over. Technology is always evolving, and the continued improvements in mobile devices and Internet speeds paint a strong picture for slots, which will continue down their own path to the future. New and exciting games are always in the pipeline, and as technologies such as 5G, virtual reality, and wearables become more mainstream, customer experiences will be more engaging, easy, and sophisticated. We see a bright future in the world of slots and look forward to seeing what tomorrow brings.

Standing out and leading the way: An interview with Delasport’s Inesa Glazaite

How to attract iGaming players and retain them [Updated]

What do Millennials and Gen Z want from iGaming?