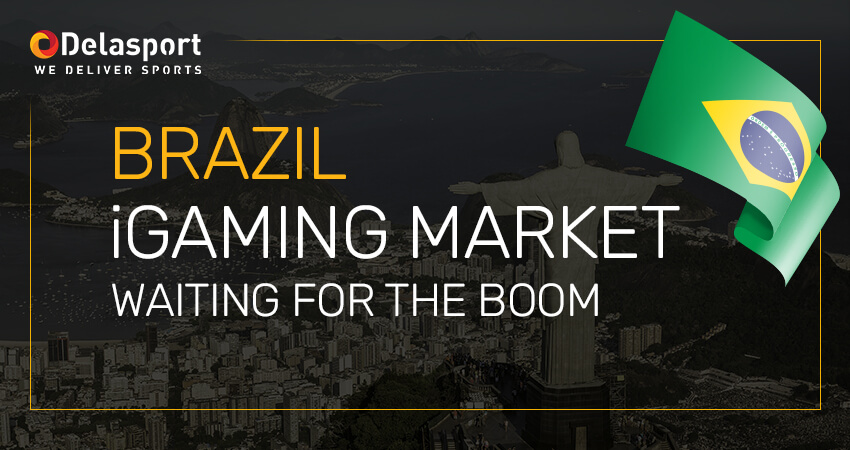 Latin America’s largest and most populous country, Brazil, is frequently referred to as a sleeping giant in the global iGaming market – one that is about to wake up. Most gambling activities are currently illegal, but attitudes towards it have changed as Brazil’s political climate has changed. The nation has everything it needs to become a global leader in iGaming, with sports betting becoming legal (but not yet liberalized) in 2018, and new regulations coming soon.

In our Brazil iGaming market report, we examine the country in greater detail to show why it represents one of the most exciting futures for the sector.

The current gambling business market is made up of lotteries and horse racing, as these are the only ones permitted – but even these are limited because of an imbalance between the population and the number of betting shops.

With new online betting rules on the horizon, the estimated Brazil iGaming market size is 2.1b USD and is expected to grow to 2.6 billion by 2026. This is due to the ongoing digitalization of the country which has an internet penetration rate of 75%, an increase of 10% since 2018. Also, there are 96 cellular subs per 100 people, thanks to a large section of the Brazilian population (more than 87%) living in metropolitan areas.

A federal law passed in 2018 recognized fixed-odds betting as a legal lottery activity. And Brazil’s Ministry of Economy was given a four-year window to develop a competitive market for both offline and online sports betting, using a licencing or concession system.

The FIFA World Cup begins just a few weeks before the 2022 deadline, so officials will want to take all possible measures to put some sort of licencing structure in place so they can profit from the new industry. However, time is running out as the deadline expires at the end of 2022.

Legislation for online and land-based casinos in Brazil

Despite having already approved a law allowing betting on sports, Brazil’s Congress is currently debating legislation that would legalise most other forms of gambling across the country.

In a landmark decision on February 23, the Brazilian Chamber of Deputies authorised up to 31 land-based casino resorts spread across the nation’s 27 states. Additional casino licences were also made available for riverboats and oceangoing cruise ships, as well as gaming resorts in some tourist areas.

Brazil’s iGaming market will likely become an extremely attractive location for operators looking to enter the next big market. Reasons include the abundance of space for large integrated resorts like those in Las Vegas, for cities like So Paulo and Rio de Janeiro. Other parts of the country will also present opportunities for mid-sized and boutique casinos.

Despite the fact that sports betting was made legal in 2018, no licencing system has yet been established. A few details still need to be worked out before the first wager is allowed to be placed. The existing fixed-odds betting legislation is only a portion of the overall legal system.

Although the new regulations have not yet taken effect, the legal framework is currently being altered. The wager tax rates for retail services decreased from 6% to 0.1% on July 15, 2021, and for internet services, they decreased from 3% to 0.05%. The 30% tax on winnings over $500 still applies.

It should come as no surprise that football is the most popular sport in Brazil, with almost everyone in the nation having some sort of affiliation with a national team. The two biggest football teams in Brazil are Flamengo from Rio de Janeiro and Corinthians from So Paulo – each of which has more than 30 million supporters.

Every day, hundreds of different markets are available for football that cover competitions from all over the world. The Campeonato Brasileiro Série A, the Primera División in Argentina, the Copa Libertadores, and all of the major European competitions, including the Premier League and Champions League.

Mixed martial arts have been extremely popular in Brazil for more than a century, and because of this, MMA betting is hugely popular across the country. After association football, it is the second most popular sport in Brazil for online betting.

Brazil has produced many well-known NBA players over the years, including Leandro Barbosa, Nene, and Tiago Splitter, to name a few. Brazilians are therefore likely to wager on basketball matches quite frequently for both domestic and international competitions. Given that Brazil has so many beaches, Brazilians are also avid volleyball players, with the national volleyball teams among the best in the world.

It is undeniable that Brazilian players desire an iGaming industry similar to what the US market did in 2018. Gambling is a significant source of income, but the government is yet to understand how to regulate it properly.

Brazil iGaming market has tremendous potential for the industry thanks to a sports-loving population that is ready to engage with gambling operators. Once the sports betting industry is up and running and new legislation is passed, we’re sure that the sleeping giant of iGaming will wake up with a boom.