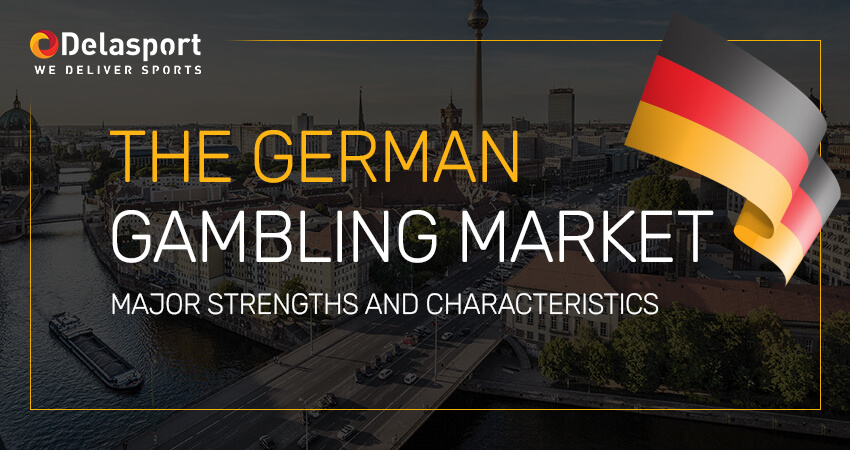 In recent months, the European Union’s largest country has made great progress in opening the iGaming market to its population of over 83 million people. Read our latest report about the German iGaming market where we take a look at how the landscape is currently looking.

Germany’s iGaming market is predicted to grow to €3.3 billion by 2024, from €2.8 billion in 2021. As a technologically sophisticated country with 58.88 million mobile Internet users (87.4% of the overall population according to Hootsuite), 95.4 % of Internet users aged 16 to 64 possess a smartphone, 83.8% own a laptop or desktop computer, and 52.7% own a tablet, according to the same research. Hootsuite also reports that 78.81 million individuals were frequent Internet users, accounting for 94% of the entire population — a growth of one million compared to the same period in the previous year.

The main interests of German players lie with casino games and online betting. In a study conducted by Goldmedia, 12% of the interviewees played online every day, with 32% playing every week. Betting on Sports events also has a high amount of participation, with 15% of players wagering every day, and 29% every week.

In Germany, gambling is overseen by a legal structure made up of state and federal regulations. In 2021, a new interstate treaty was created to allow operators to provide online poker and slots on a federal level (for the first time). At the time, Sports betting was already available. This meant that a common legal framework could be placed for betting across Germany, with the government having the power to exact stricter regulations if necessary.

The new Interstate Treaty on Gambling

Taking effect on July 1, 2021, the new Interstate Treaty on Gambling (ISTG 21) incorporated significant changes to the regulation. For instance, online gambling was previously restricted to the northern state of Schleswig-Holstein but is now likely to be legalized across the rest of Germany, giving operators the possibility to access new licenses.

The new regulations are not without their stipulations. For instance, the way taxes and advertising are going to be handled will be stricter, plus there will be more control around betting and deposit limits. Here are some of the other new rules:

While advertisements are allowed, there are several rules to follow in the German iGaming market:

The tax rate for online sports gambling, horse race betting, online slots, and poker activities is 5.3% of turnover. Online casino games are now liable for 19% VAT in Germany, according to amendments to the VAT legislation that took effect on January 1, 2015, regardless of whether they are operating illegally in the nation.

Most popular casino games in Germany

With games like Mystery Joker, All Ways Joker, and Fire Joker, Casino players in the German iGaming market are fans of the Joker motif. Book of Dead is a very popular video slot that has had a lot of momentum in the industry for numerous years. Slot machines, as in most other nations, are the most popular, although table games like Blackjack and Roulette are also well-liked. Many operators are producing their own takes on the classics, focusing on high-quality visuals, gamification, and sophisticated playing mechanics.

Most popular sports to bet on in Germany

As with most European countries, football is by far the most popular sport in the German iGaming market. As a result, it’s no surprise that the sport is well-represented on betting sites catering to German customers. From the Bundesliga to the Premier League, La Liga, Serie A, and others, all of Europe’s top leagues are available. Domestic cup tournaments like the DFB-Pokal, as well as European competitions like the Europa League and Champions League, are also widely covered.

Handball is also one of Germany’s most popular sports, so it stands to reason that betting sites are including it in their offering. With competitions in Denmark, Norway, Romania, and other countries, the Bundesliga, DHB Pokal, and Super Cup are among the most well-known national-level handball events.

Amongst the German iGaming market, the rising popularity of Esports in Europe is evident. CS:GO is currently one of the most popular games to bet on, and almost every major sportsbook now includes an Esports section. From the world’s top tournaments, such as the major championships, to lower-level leagues, everything is covered.

Other popular sports to bet on include Tennis, boxing, golf, racing, MMA, and athletics. Table tennis, snooker, badminton, and darts are also prolific. Horseracing is a significant business, but coverage is still uneven owing to licensing concerns

The future of iGaming in Germany

After the United Kingdom and ahead of Italy, the German iGaming market is the second largest in Europe. Local providers like as Tipico and overseas players such as bet365 have already entered the industry. The size of the German iGaming market is predicted to expand by around 10% year over year. Because there are still areas of ambiguity, operators, and software providers are waiting for the full regulatory process to be finished.